The game of ice hockey has its roots in the various stick-and-ball games played over the centuries in the United Kingdom, and North America.[5][6] From prior to the establishment of Canada, Europeans are recorded as having played versions of field hockey and its relatives, while the Mi'kmaq indigenous peoples of the Maritimes also had a ball-and-stick game, and made many hockey sticks used by Europeans in the 1800s. From these roots, the contemporary sport of ice hockey was developed in Canada, most notably in Montreal, where the first indoor hockey game was played on March 3, 1875, at the Victoria Skating Rink, organized by James Creighton, a McGill University student from Halifax, Nova Scotia. Some characteristics of that game, such as the length of the ice rink and the use of a puck, have been retained to this day. The IIHF would later adopt the Canadian rules as the official rules of ice hockey. 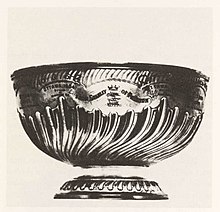 The Stanley Cup in 1893. The trophy was donated by Lord Stanley of Preston, to be awarded to the top ice hockey team in the country.

Annual championships began in Montreal in the 1880s, leading to the awarding of the Stanley Cup, considered the oldest trophy in North American sports. Lord Stanley of Preston was appointed by Queen Victoria to be the Governor General of Canada on June 11, 1888. While governor, ice hockey was still just forming in Canada. He first got to see the game of hockey played at Montreal's 1889 Winter Carnival. During the carnival he watched the Montreal Victorias play the Montreal Hockey Club. Afterwards, Stanley and his family became very involved in the game of ice hockey. His two sons, Arthur and Algernon, convinced their father to donate a trophy that would be considered to be a visible sign of the ice hockey championship, which was a silver bowl inlaid with gold. The trophy was first presented in 1893 and was called the Dominion Hockey Challenge Cup. The name of the trophy has since been known as the Stanley Cup.[6][5] Several traditions remain from early amateur play, including hand-shakes between opposing teams after a championship match.